To add to our already long list of Christmas traditions Jorge and I decided to take Lori to see Santa Clause at Stanford mall last week. We waited in line for a little while and when it was Lori's turn the "Helper Elf" (He wasn't dressed like one but it was his job all the same) came up to me, very animated and said "OK, here's what we're going to do, we're going to have you "back her in" while you step over here and distract her, while we take a few pictures" My response was, "uh, I don't think she'll have any problems, but ok"
He looked at me and Lori, and then repositioned himself so he could PHYSICALLY block Lori seeing Santa. "Yeah, we don't like ones her age to see Santa" Evidently he takes his job very seriously! (and rightfully so, what would Christmas be with out pictures with a mall Santa?)
It didn't take him long to realize that Lori was in no way worried about meeting the Jolly white-bearded fellow so he let me go a head and put her on his lap. 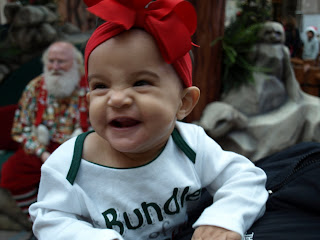 This might have helped change his mind.
(Lori smiling at her Daddy taking a picture.)


Once Lori was permitted to sit on Saint Nick's lap they took some pictures, very quickly I might add and then it was time to go, but not before we purchased our photo package. (and those things ain't cheap!!)

As we were leaving the "Helper Elf" says to me and Jorge, "That is that happiest baby." I said thank you and something along the lines of "yay Lori, way to go!" and I shrugged it off as the elf just trying to get us to buy pictures BUT I realized that I had already bought the pictures. Then he looked at us and in all seriousness said "No, seriously, I've been here for 47 days straight and that is the happiest baby I've ever seen!"

and here's why he said that... 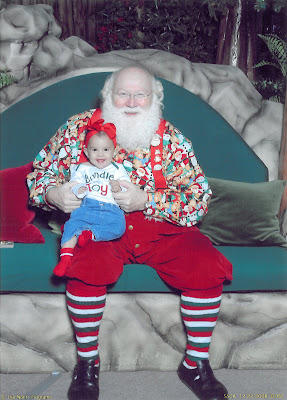 Love Jorge, Dana and Lori
Posted by His and Hernandez at 1:05 PM 2 comments:

Email ThisBlogThis!Share to TwitterShare to FacebookShare to Pinterest
Labels: Holidays

Back in August our friend Tammy Myers showed me how to make my own baby wipes and I LOVE IT! There are many advantages to making your own wipes, the first of which is obviously cost. A box of baby wipes cost around 2-4 dollars depending on where you get them from and they usually only have about 80 wipes. When you make your own wipes you use "select a size" paper towels, which only cost about 2-3 dollars. Each roll has 133-140 sheets per roll AND you cut those in half so you actually get between 266-280 wipes. Because the "recipe" calls for baby wash the wipes are very gentle, gentle enough for wiping her face, hands and neck. And on top of all that, they smell really nice!

Besides the paper towels, there are a few supplies that you'll need but most of those you'll have lying around the house. 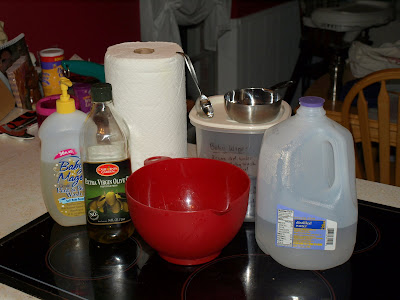 Here's what you'll need: Baby wash (your favorite brand and sent), Olive Oil, 1 roll of Select-a-Size paper towels (I like to use Bounty), a mixing bowl, a container for the wipes, a tablespoon, a 1 cup measuring cup and Distilled Water 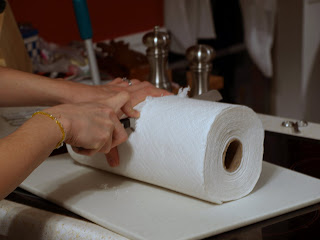 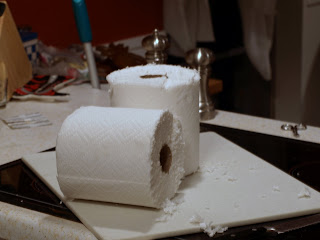 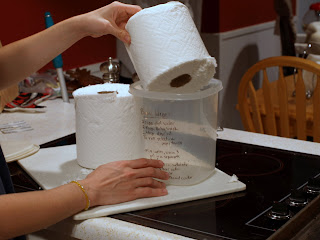 Place the roll, cut side down, in to the container. 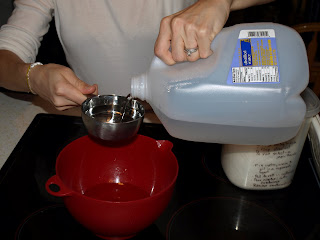 Then in a mixing bowl mix together 2 cups of distilled water, 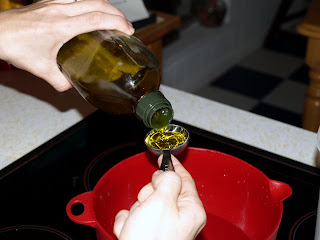 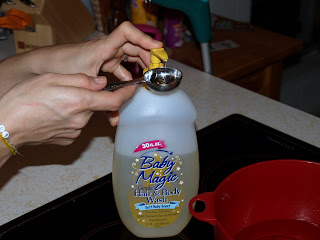 and 2 tablespoons of baby wash. 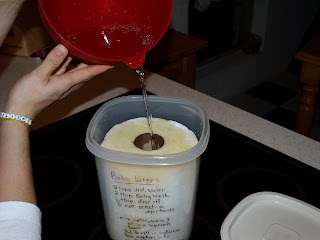 pour mixture all over paper towels, making sure to pour in AND around the cardboard roll. 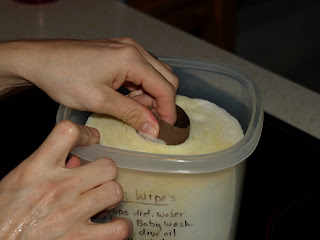 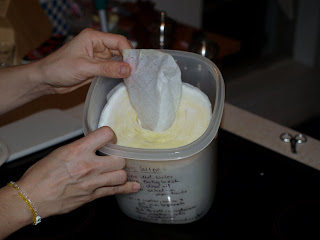 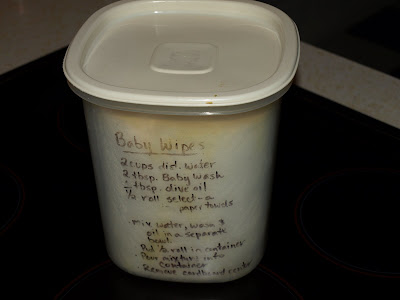 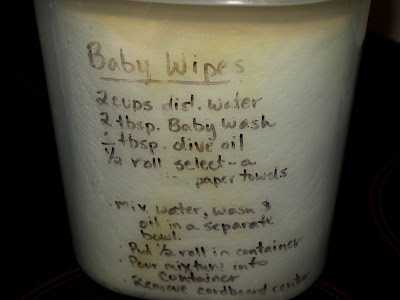 Lastly,Tammy recommend writing the "recipe" for the baby wipes on the side of the container for easy access. She was nice enough to give me her old container that she used with her kids!

Posted by His and Hernandez at 9:31 AM 6 comments:

Email ThisBlogThis!Share to TwitterShare to FacebookShare to Pinterest
Labels: Stay at Home(made) Mom

I'm not one to believe in "luck" but I do think that God does allow for some pretty close calls... our family just experienced one that had it gone the other way my life would have been forever different.

Tonight, while I was helping out with the kids choirs at church, Jorge took Lori to Walgreens to pick up some pictures for me. While he was there he decided to get some pushpins so he could hang a poster in Lori's room. It took him a few minutes to find them, pick between colored or clear (he went with clear) and check out. As he was walking out of the store he heard sirens and just then a car came RACING through the parking lot, no more than 5 feet in front of him (and Lori!!) followed closely by a cop car! Jorge said that had he not gone and gotten those pushpins he most likely would have been in the car backing out and would have been t-boned by that car! He said that even though he could hear the sirens he still would have backed out because when you hear sirens you don't think that they'll be racing through the parking lot your in.

Thank God for those pushpins!!
Posted by His and Hernandez at 8:26 PM 4 comments:

So much to be thankful for!!

(After reading my sister's blog I felt the need to write a little bit about out Thanksgiving this year.)

We were blessed to have my WHOLE family join us for Thanksgiving this year!

They all got here on Friday and after we had lunch I introduced them to the joys of SuperTarget! (My sister Megan loves Target, so I knew she'd enjoy a SUPER one!) For dinner we all went to Logan's Roadhouse, a staple for all out of town company! Logan's has the BEST rolls known to man, and they GIVE them to you! You can't go wrong with a place that has free bread, ribs that fall off the bone, and that lets you throw peanut shells on the floor!! The best! 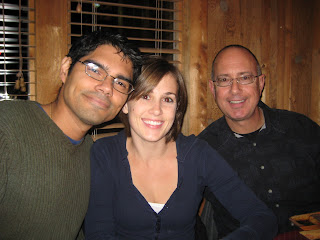 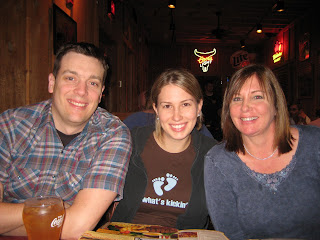 On Saturday we made our first Thanksgiving "lunch" 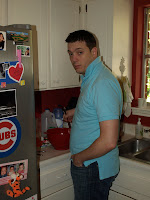 Ryan helping, enjoying himself to the fullest! 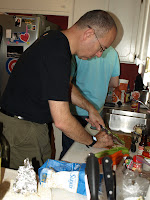 Dad working on his stuffing, or dressing as it's called in Texas 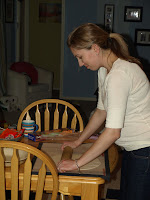 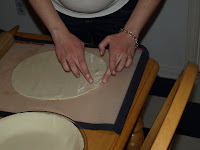 Megan makin' a pie. Note Megan's little belly in the top of the picture on the right! (I love it!!) 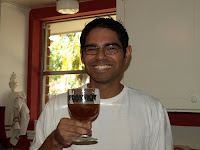 Jorge and a chalice of chicken drippings 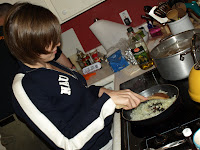 and then the four of us "kids" headed off to watch the Twilight movie. Needless to say, Megan and I were a little more excited to see it than Jorge and Ryan (our brother-in-law)

We were lucky enough to be able to plan it so that Lori could be dedicated while my whole family was out here. (more on this to come in a later post) It was so great to have them here for such a special time. Earl Baudin took some family pictures for us. He's an amazing photographer, here's the Proof. 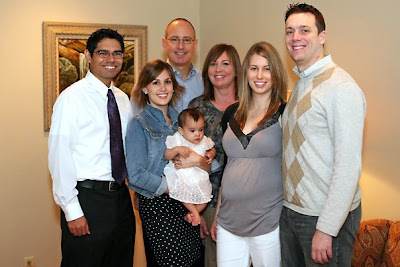 We loved having them here. Lori loved it so much that she didn't nap the WHOLE week!
Posted by His and Hernandez at 3:56 PM 2 comments: