Today was Go Texan Day. What is Go Texan Day you ask? Well, it's a day that is set aside for all Houstonians to wear their "Texas garb". That's it. According to Wikipedia it was first thought of in 1938 but wasn't put in to practice until the 1950's. Every year since 1954 Go Texan Day has been the traditional way they kick off the Houston Livestock Show and Rodeo. It seems to be a real big deal out here... I saw a guy driving his car in a cowboy hat, two kids at target wearing "western gear" (including purple cowboy boots - awesome!) AND a group of people in a flat bed trailer being pulled around our neighborhood, similar to a hayride, but with out the hay... or the horses... or the farm... or any particular purpose what so ever. Only in Texas I suppose.

Since my kids are Houstonians born and raised, I figured we'd follow suit. Jorge says that he can't ever dress up like a cowboy cause he always ends up looking like a migrant worker... sadly, he's kinda right. But I don't think that's the case with the kids though... at least not yet. 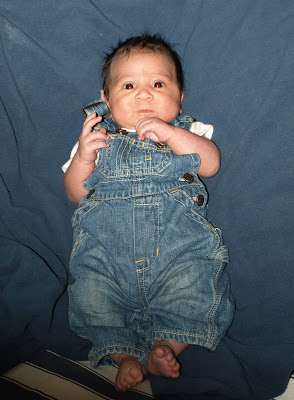 Davey in his overalls, and his bandanna cloth diaper (not pictured :) ) 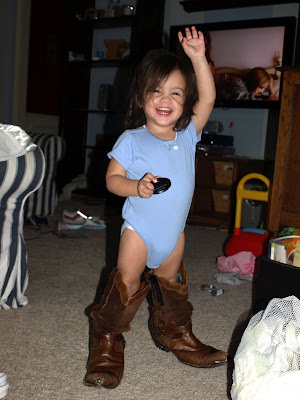 and Lori in my cowboy boots.

Email ThisBlogThis!Share to TwitterShare to FacebookShare to Pinterest
Labels: Misc.

I've finally done it! I said I was going to do it and I did! I am now a user of cloth diapers. Well, I AM not using them, but I'm using them on David. I only had 3 up to start cause I wanted to try it out and make sure I really wanted to use them. And I DID! On Monday I went to a store called Nurtured Family (see link on the right) and got the rest of my "stash", 12 in all. Tuesday was the first day that I used them ALL day and I really enjoyed it, as much as one can "enjoy" diapers I suppose.

I was so excited that I contacted the mom website that I am involved with and pitched an idea of a weekly blog about my adventures in cloth diapers. They LOVED the idea so today they posted my first blog post. I feel so accomplished. It's also got me thinking about doing more writing, i.e product reviews and stuff like that. Who would have thought that cloth diapers could make me want to be a writer. (I use the term loosely of course, and I don't actually know if I want to be a WRITER but I definitely want to do more writing.)

Here's the link to my first post... Diaper Diaries: a first timers adventure in cloth diapers. I'm actually finding that I have so much to say that I'm tempted to make it more than once a week. For those of you who are interested in hearing/learning more about cloth diapers, I'd love to hear your feed back as far as any questions you may have that you would want me to answer or look in to for you.

So now you can all follow me on Momslikeme.com as well as here. Isn't that special? :)
Posted by His and Hernandez at 8:12 AM No comments:

About a week ago, Lori discovered that she has the ability to climb out of her crib. We figured this out when I woke up to the sounds of Lori from her dresser opening and closing her drawers trying to get pick out an outfit. That was certainly a shock. So since then we've been making the transition to a "big girl bed", which is really just a crib mattress on the floor of her room. At first it was REALLY difficult. We'd put her in bed, say prayers, sing a song and then close the door. She would either come to the door and try to get out, or walk around the room and find something to play with. We'd hear her singing and playing or fiddling with the door, or we'd hear nothing. For some reason, maybe it's just that I know my daughter WAY too well, but hearing nothing made me feel terribly uneasy. Jorge and I will go back and forth about if we should check on her or not. Usually I'm right and those times that she's quiet are the worst.

Take last night for example, Jorge was gone leading a Bible study at church, so I put Lori to bed myself. She went down really well, she didn't try to come out of her room and when I did hear her I called to her to get in bed and then didn't hear anything for about 30-40 min. It all was really easy... too easy. So I decided to check on her before I hopped in the shower, and I'm glad I did. I found her COMPLETELY nakey, sitting on her bed, with the box of homemade wipes. She had gotten out of her jammies, some how managed to shimmy out of her diaper (that was DUCT TAPED on mind you) and was wiping herself, her bed, and her stuff animals, that's probably why she needed 34 WIPES!! 34 WIPES people! I was furious to say the least! She was nice enough to put the diaper (which was clean by the way) and roughly 28 or so of the wipes in the diaper pail, but even so, I was still so mad.

Napping in her bed was completely out of the question, up until a few days ago. But every day gets better. The other day, after much struggle I finally won, and she napped in her bed. When I went in to check on her (like I said, when it's quiet I worry, so I check on her.) this is what I found. 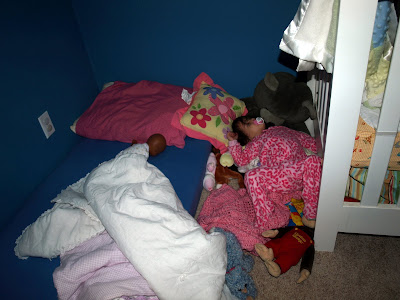 I guess this counts as sleeping IN her big girl bed...

And on another day... 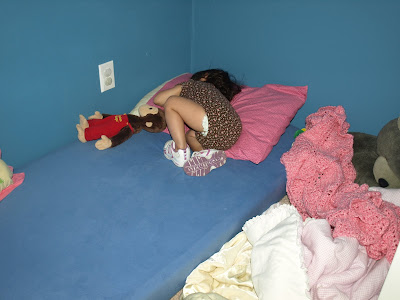 So we don't bother with the crib anymore. Our baby is growing up! As soon as she masters the crib mattress with out getting up and getting in to trouble we're going to get her a twin bed. (Probably with some Dora sheets.) We are going to put Davey in her old crib EXCEPT for the fact that Lori can now climb IN to the crib too... so no one is safe. :)
Posted by His and Hernandez at 9:13 AM 1 comment: