My cousin, my Hero!! 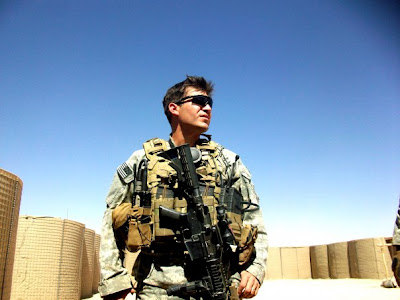 On July 19th, I lost my cousin and friend Sgt. Brian Piercy. He was fighting for our freedom over in Afghanistan. 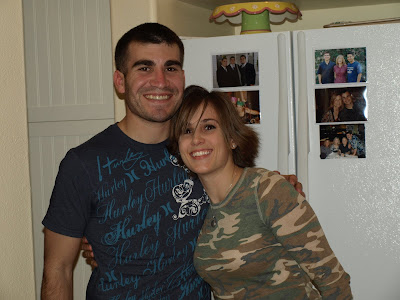 My dad was the one who told me, and ever since I have been filled with every sort of emotion you can think of. Sorrow, angry, numbness, denial, guilt, even hatred. Acceptance comes for a few seconds and then goes just about as fast as it came. He was a good man, he IS a good man. Its funny, I can say "was" but typing it seems odd, too permanent maybe. This first picture of just him and I makes my heart hurt. I can only look at it so long before I realize that I'll never get to hug him again. It's just weird.

Brian, his twin brother Eric and I are only 4 months apart and we have always gotten along really well. They lived a few hours away but we always got together for Christmas or Easter or family weddings as well as a few other times a year, We were always getting in to some sort of trouble... always fun for us, but trouble for our folks. As we got older we saw each other a little less until high school when our busy schedules finally matched up. It always seemed like it was only 2 of the 3 though. (Brian and Eric have a younger brother Kevin) Either Brian and Kevin or Kevin and Eric, but rarely all 3. (THOSE times were and are extra special)
One time in particular it was just Brian and Kevin and we were board and watching T.V. I think Brian was channel surfing and as we were passing a certain channel Kevin screams out "OOH!! UNCLE BUCK!!" Brian and I looked at each other and in confusion and then BUSTED UP laughing. I mean seriously, Uncle Buck?? (not saying it's not a good movie, it's just that it didn't seem to warrant THAT amount of enthusiasm.) And that was the first time we laughed so hard together it hurt! It seemed like every time we saw each other after that we laughed until it hurt. I've never laughed so hard, with someone so often in all my life. I will always have that with him, always.The other thing about that trip that stands out is that for some unknown reason, our parents sent us to the corner market for snacks, or maybe we just went on our own, I don't remember. All I know is that some how we ended up buying Dreyers Scooby Snacks ice cream as a joke which turned out to be our new FAVORITE ice cream flavor. We would talk about it all the time, as well as Uncle Buck and to this day I do not see that movie with out thinking about Brian and Kevin.
I have never had to deal with death. Most of my family members who have died, died either before I was born, before I could remember anything OR where on the older side and were "ready to go". This was not like that. He was taken from us, it was someones fault. I know that he did not suffer, and that he died doing what he loved and I do find some comfort in that. But for the most part this is still very foreign to me. 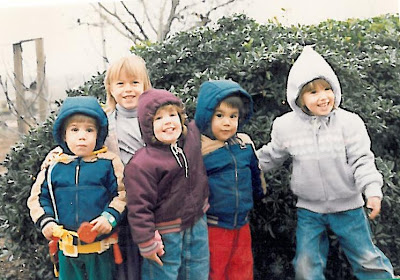 One of my favorite pictures! (Not only cause my jacket was AWESOME (purple corduroy!) but because it was all of us together!) 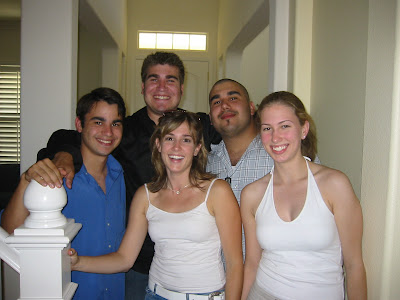 It was very rare that we were ALL together at the same time, like I said it was usually Kevin and one of the twins, I think that's why I love this one. 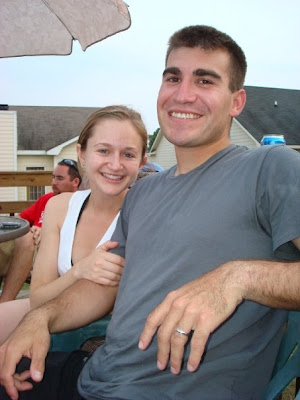 Back in 2006 Brian married Christina, and she made him happier than I'd ever seen him. They are a perfect match. Please pray for her as she grieves the loss of her best friend and sole mate. I can only imagine what she's going through. 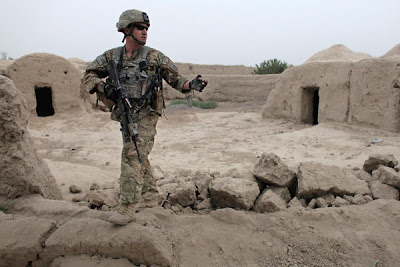 THIS photo (sorry, there's been a lot I know) was taken 6 days before his death, he was apparently giving orders to his squad, which I think is very cool. I love looking at it cause when I do I see strength, courage, and confidence. I see a hero. Brain was my hero and even though sometimes I don't understand why or who he was fighting, I know that he was fighting for what he believed in. I miss him terribly.
Posted by His and Hernandez at 9:24 AM 4 comments: 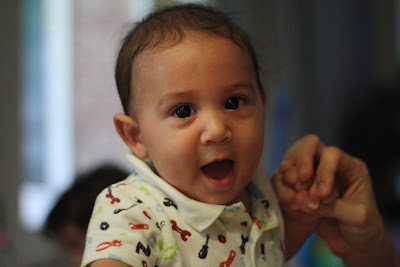 I can not believe its been 6 months since Davey was born. He has grown in so many ways, which is to be expected I suppose. I am just beyond in love with this little boy! As of July 8th he can sit up by himself with out falling over and as of yesterday, July 14th he is CRAWLING! Ok, so crawling my be a SLIGHT overstatement, however he pulls himself towards the toys that he wants, usually my phone or one of Lori's shoes, more than a toy really. It still counts in my opinion cause he sees what he wants and he gets there... usually.
He's such an interesting little kid. Jorge and I talk about how different he and Lori are all the time. For one, he's WAY bigger!! When Lori was the size he is now, she was 9, probably 10 months old! He's a MOOSE! He also laughs more than we remember Lori doing. Which is special for me since he's middle name means "Laughter". He also loves to watch T.V, unlike his sister who couldn't care less about T.V until just recently AND play with toys. Lori didn't have much interest in toys until not too long ago. I love watching the two of them "play". Most of the time it's just Lori trying to convince Davey or I that he is done playing with the fancy light-up, music playing toy by trading him for something not NEARLY as entertaining. "He aw done. Day-Dee aw done" "Uhh, yeah Lori, I don't think so." Haa ha, never a dull moment with these two. They are also similar in the sense that they are both basically good natured, happy, easy going kids. 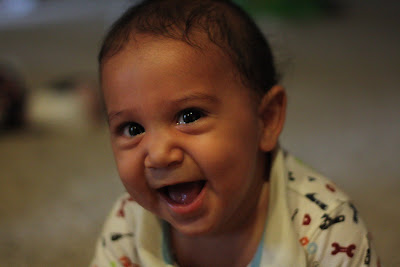 Happy 1/2 Birthday Big Man! We love you and are so proud of you! 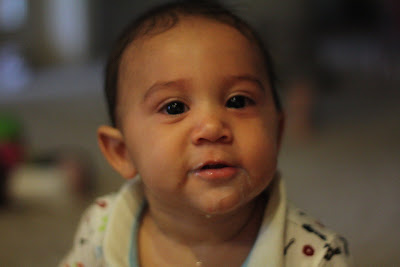 (photos curiosity of Aunt May-Me photography. haha )
Posted by His and Hernandez at 12:48 PM 5 comments: