Away in a Manger!

I was pretty excited for this Christmas because Lori is at the age where she is just now getting the whole concept. "Be a good girl or Santa won't bring you any Band-aids" has become a real threat that actually yelds results. (Band-aids and batteries are the only things she's asking Santa for) I've been enjoying watching all the Christmas movies through new eyes. The lights, the tree, the cookies and decorations all have a new magic about them. With all this new found excitement though, comes a responsibility. It is my responsibility, as well as Jorge's to teach Lori what the TRUE meaning of Christmas is. Most of the Christmas books are about Jesus and not Santa, so we've been reading those. However... I'm fairly confidant that our church's FABULOUS childrens program is to thank for the bulk of her knowledge.

A few weeks ago Lori was asking me if I wanted to go to a party with her. I had NO idea what she was talking about, church had been over for hours and we had just been running errands so I wasn't really thinking along those lines. (I actually first thought she was inviting me to go POTTY with her, but that's a different story, anyway...) Upon further questioning I figured out that she was inviting me to a party for Jesus' birthday being thrown by our childrens ministries at our church. Last Sunday was the party, which Lori informed me was complete with cupcakes. They were able to capture this picture for me... which I will forever be thankful for! 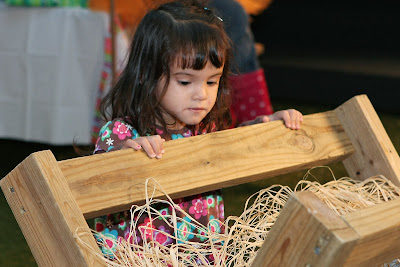 When Lori saw this picture she said "Hey, that's me!" and then the following conversation took place.
Me: What were you doing?
Lori: I was looking at the Angel baby
Me: The Angel baby? What was his name?
Jorge: Jesus?
Lori: Yes, Jesus.
Me: What was He doing?
Lori: He was sleeping. In the manger. Cause He doesn't have a crib anymore.
Me: Why doesn't He have a crib?
Lori: Umm... I don't know.

Out of the mouths of babes, as they say. I truly just LOVE the simplicity of her logic and thinking.
Posted by His and Hernandez at 12:50 PM No comments: