This Mother's Day was AMAZING! It started out with Lori bringing me my travel coffee mug, with a NEW insert that she and Jorge made. It was the most wonderful thing I've ever seen! In all honesty it was. As you all know I am a pretty crafty person, and having worked at a school, I was the one who made all the crafts and gifts for kids to give there moms. In the back of my mind, I always thought I'd be the one makin' my own keepsake crafts with Lori. But Jorge did it for me. Now all she did was "color" a little part of it, but still, it was so special! He even have Davey a crayon and had him help a little too! 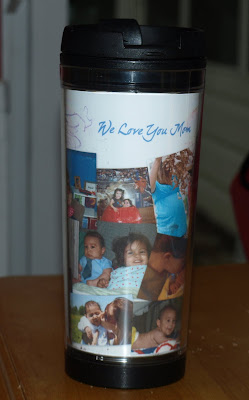 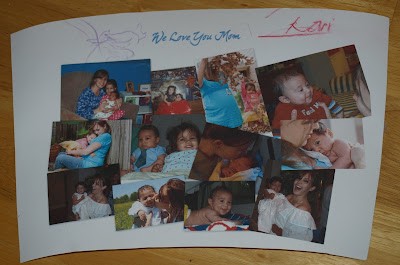 David's part is the purple on the right and Lori's in the red. (Jorge helped her write her name, she's not THAT advanced)

Then we went to church where I received a rose for being the mom of one of the youngest babies in the service. :) 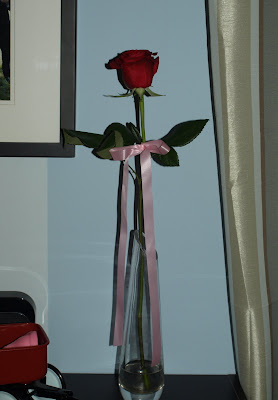 After church we all came home for peanut butter and honey sandwiches and while eating lunch our neighbor came over and said he was going to have our backyards mowed and edged as a gift for me for mother's day!! Isn't that awesome? I thought so! :)

The rest of the day went like this, Lori took a nap while Jorge watched the Cubs game and Davey and I stepped out for a bit. When I got in my car I heard the familiar sounds of the Glee soundtrack that Jorge had slipped in to my CD player which hadn't worked in MONTHS!! He totally surprised me, which trust me, is very hard to do. We drove to the used book store, the Goodwill and Micheals, just cause I wanted to. Once we got home, we all drop to the Super Target where we met up with my sister and her family for "Frappy Hour" (1/2 priced frappacinos) and the Starbucks there. After THAT, (wow this is turning out to be a rather packed day isn't it?) we went for a walk with my sister and her family, and our good friends the Kuykendalls. Then came home, put the kids down and had pizza! It was great!
Posted by His and Hernandez at 3:42 PM 1 comment:

worth while moments... (working title - anyone got anything better?)

The other day I had to run errands and naturally Lori and Davey came with. I took the kids to Hobby Lobby and after about 2.5 seconds Lori was done with the cart! "Running Lori?" (yes she does mean run and yes, everything she says is with a "?" at the end) Needless to say, I wasn't about to let her run around the store, so I had to do my best to entertain her. Eventually she grew tired of me and desided to lay down. This girl is a kook and a half and makes me laugh! (ok that rhymes but it was unintentional... I promise.) 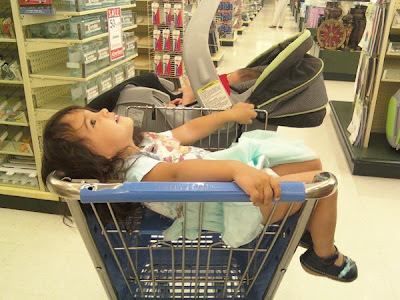 Posted by His and Hernandez at 7:15 PM No comments:

worth while moments... (working title)

Like I mentioned in my last post, I'm going to start making note of the things that my kids do that remind me why I do what I do.

After Lori's birthday party we opened gifts and she got to play with some of her new toys. Jorge had to run some errands so it was just me and the bubbas. (My sister's and my nickname for babies...) She got tons of dress up stuff, so naturally we had to open it all and try it on right away! :) 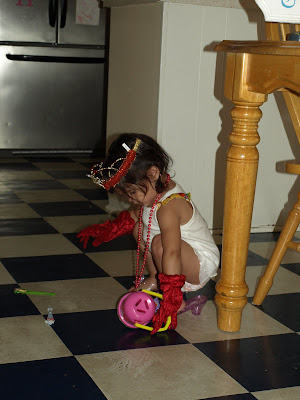 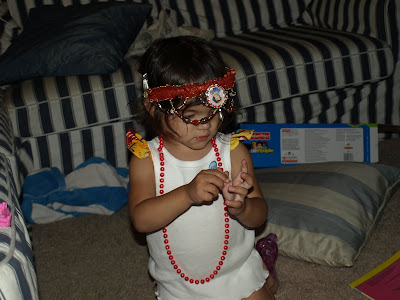 I also gave her a toy which she was given LAST year but it was kinda over her head so I put it away until this year. :) I love watching Lori play with her toys. I think it's so neat that she actually PLAYS. It's fun to see her actually DO things with her toys, like playing with her babies and copy what she sees me do with David.

After she had been playing dress up for a bit I noticed this... 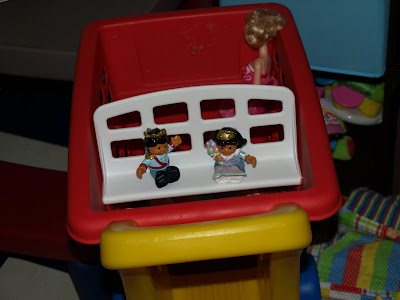 and it made me smile.
Posted by His and Hernandez at 12:18 PM No comments:

The cheese factor of this post promises to be extremely high, so be forewarned.

Parenting is tough. It's easily the hardest thing I've ever done. (oxymoron?) But everyday I am reminded why it's worth it. Starting today I will to start making a note of those moments, and blogging them when at all possible.

Lori has been acting up for the last few months, probably the "terrible two's" even though she just turned two last week. (We always said she was advanced. :) ) She's been getting on my last nerve A LOT and has decided that bedtime should take over an HOUR! BUT like I said there are times when she says or does something that just melts my heart! This time it really didn't involve me so much, but made me feel so appreciative that God has placed her in my care (sometimes I wonder what He was thinking! Ok, most of the time I wonder what He was thinking) and that He has allowed me to get to witness the sweet moments of her growing up.Several weeks ago Lori and I were headed to Bible Study and as we were passing the play ground we heard a little voice say "Lori!". We stopped to see who had said it and saw our friends little girl Rachel standing at the top of the play structure. She immediately headed for the slide, slid down and raced over to the rod-iron fence that contains the playground. Lori said "ACHEL!",(yes Achel... it's not a typo) ran to meet her and the girls embarrassed through the fence. I took a picture on my phone! (which I actually thought didn't get saved on my phone and was super sad but then mysteriously showed up on my phone yesterday!) 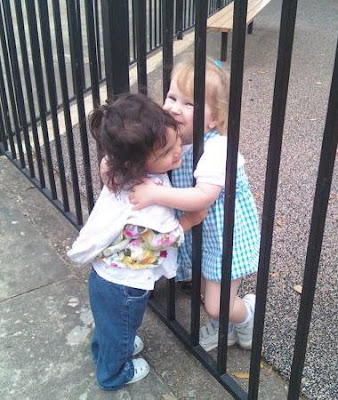 (I don't know how or why it happened but I'm so glad that this picture showed up. I know I'll never forget it, but I'm just so happy I have a copy of this moment to share with everyone.)

Why is this such a sweet moment for me? I think it's because it reminded me that I, we, are so blessed by our community here in Houston. My child/children are loved so much by the people around them. Moving here was a big step for us BUT it has proven time and again to have been the right decision. And it also made me realize that Lori is growing up so fast, and that she's made her first REAL friend.
Posted by His and Hernandez at 10:28 AM No comments: