What do you get when you cross stay at home moms with crafty entrepreneurs? You get Etsy.com, an online market place devoted to selling solely handmade items. It's not unlike Ebay.com, just without the bidding and second hand junk aspect. I kind of stumbled across this site while looking for my cousin's homemade diaper covers online. She was selling them on Etsy and found myself really intrigued by this creative site with a strange name. (The origins of the name are unknown.)

A few weeks later I had grown tired of looking for Lori's burp cloths because they were stark white and seemed to blend in with everything. I decided that I should sew some ribbon and maybe a soft piece of fabric on them so that they would stand out. They didn't look half bad. So I kept going, I dyed them, got nicer ribbons, and added new fabric. Then I realized that I had an extra Cubs emblem from a T-Shirt that I got for Jorge's T-Shirt quilt and from then on I was ON A ROLL! It took me a while to realize that it might be a good idea to see if I could sell these on Etsy. I love sewing and doing lots (and I do mean lots, probably too many for my own good) of crafty things, so why not try to make some extra cash while I was at it? 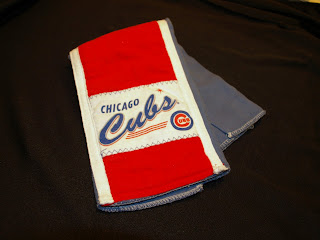 I am yet to make a sale, but that's ok. I was getting discouraged but Jorge has been so supportive that I haven't really considered giving up. For the first time I really feel like Jorge is in this with me and that feels great. I really enjoy the days that Jorge comes home from work and I get to show him my latest project.

So that's the newest with me. I've posted a link to my new Etsy site so that you can see what kind of things I've been making. I'm "looking to expand my repertoire" (don't I sound professional already?) so if you have any ideas I'd LOVE to hear 'em. I'm always up for a new craft project!
Posted by His and Hernandez at 10:07 PM 2 comments:

Now I'm FINALLY getting around to posting the Chicago part of our Wisconsin/Chicago trip... (I'm assuming that all 5 of you readers have been sitting on the edge of your seats, just waiting... well here it is.)

When we got to Chicago we went to a place called Wolfy's for lunch with Jorge's friends from high school and their kids. Wolfy's is a place near their old church, it specializes in Chicago Hot Dogs, and yes there is a difference. 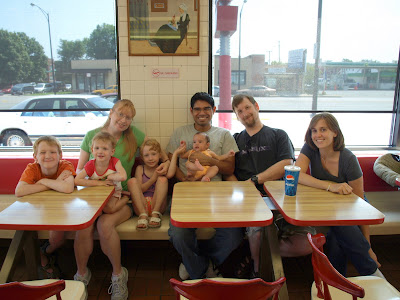 After lunch be decided that it was time that Lori took her first trip to Wrigleyville! We took the "L" like any self-respecting Chicagoans. 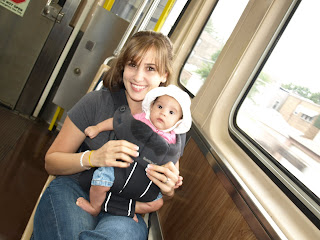 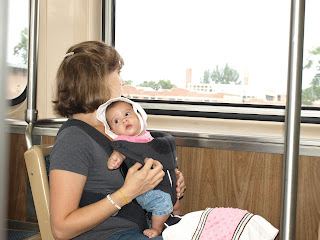 At Wrigley Field we looked for the brick that my family and I got Jorge for his 32 birthday. It took FOREVER!! But we found it!! 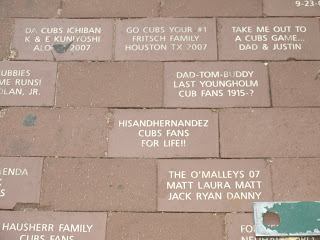 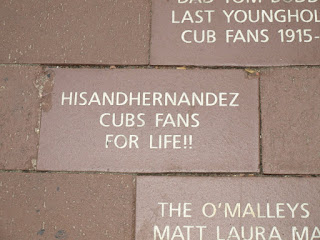 We had Mike take some pictures of us at Wigley Field. He hurt his knee a while back and I felt horrible making him walk all over the place. But he seemed happy to do it, and we loved having him with us. 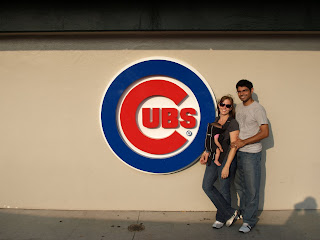 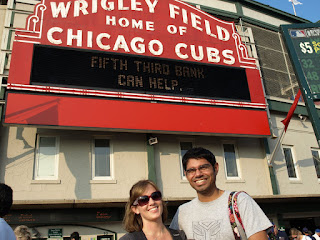 Mike had to bend down to take this and with his knee injury we was only able to bend down so far... hence Lori getting cut off.
(This did not help the guilty feelings I had from having him come with us.) 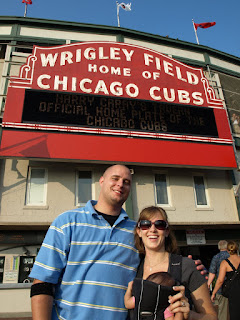 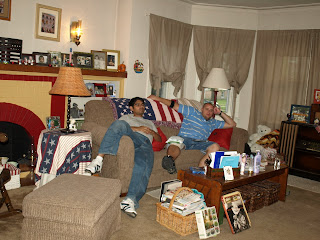 Jorge and Mike resting, watching T.V after a long day. Mike was "icing" his knee with frozen peas, and I think Jorge was just sitting that way because it was comfortable. 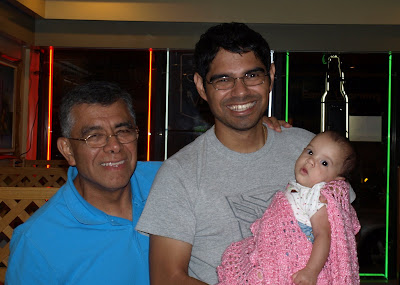 We met Jorge's dad for dinner that night, so he could meet Lori. Pop, as he is known in our house, told Jorge that he was SO excited to meet her that he had butterflies all day. All of this was such an answer to prayer. We weren't really sure how he would be with Lori. He wasn't exactly the most affectionate or involved father. It might be too late for him to be the dad Jorge needed, but it seems like he might be able to be a good Grandfather for Lori. He told us that instead of retiring this year like he was intending, he's going to work one more year so he can give Lori some money in an account he's setting up for her. We were both very touched by his generous gift, not only of his money, but his time... one whole year of work, just for our baby. Very generous.
I can see a change in the way Jorge interacts with his dad, so it seems like Lori is bridging the gap between them. It is such a blessing. SHE is such a blessing! 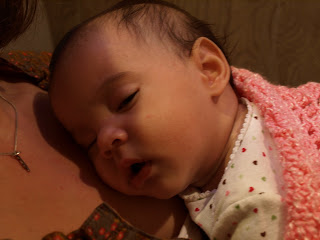 Lori was TIRED! She slept through most of the dinner.

The next day both Jorge and Mike were good sports and went with me to 2 or 3 thrift stores so that I could find old Cubs, Bulls and Bears shirts for a T-Shirt quilt I'm making for Jorge. I've been planning on doing this since our LAST trip to Chicago 5 years ago. They both searched the racks with me, it was very sweet. It was a successful trip, I got 11 shirts total. Unfortunately, I still need about 3 or 4 more shirts so I won't be able to finish it any time soon... but hey... more reason to go back right?
Posted by His and Hernandez at 1:17 PM 2 comments:

On August 2, 2008 Lori rolled over for the first time... on purpose. (We knew it was on purpose because she did it twice) She had accidentally rolled over before but this time she meant to. It was a Saturday so Jorge and I were able to experience it together. It was amazing. I was able to film this clip a few days later... after she became a pro at it. She is yet to roll over form her back to her tummy, but she's getting very close now! It could be any day now, so stay tuned!